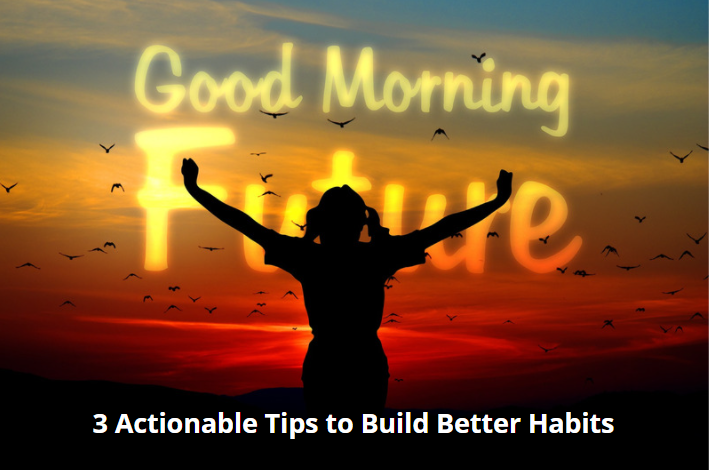 Habits are small decisions taken into regular action. How it shapes you is a result of the habits you had decided to develop in the past. But do you know how you develop that particular habit? Are you aware of how you were able to build those habits?

In research by Duke University published online on January 16, 2016, scientists suggest that habits manifest in the brain and suggest new strategies for breaking them. Practices leave a lasting mark on specific circuits of the brain. So whatever you build up in the brain would become the actions that you perform every day.

Therefore, you may ask, how to consciously build up those actions so that the brain could develop them into a habit? Some of these actions are just simple and easily applicable, and here are three of them:

How to Build Better Habits

Researchers say that people who are successful in controlling their behavior form good habits, but there are more to it than just self-control:

Since all habits start with the function of the brain, better understand how it works through forming the pattern that becomes a habit.

It all comes from neuroscience; it appreciates how the brain works with other body parts, primarily the nervous system. The brain forms neural pathways that send signals from one part of the brain to the other. The more you perform a task or the longer you think about how a job is done, the stronger the neural pathways will become. And it retains the information that will eventually form into a habit.

Thus the general rule of the brain in forming a habit is: make a repetitive action in a span that the brain can clearly remember it. According to the European Journal of Social Psychology, it takes 18 – 254 days to form an automatic behavior about something they repeatedly do.

A single missed opportunity to perform that action or process does not materially affect the habit formation process. So, do it in a span that your brain can develop and process into a habit.

2. Write down your goal.

When aiming to develop a habit, always be clear about your goal. It guides you to attain the result of something that you envision and commit to achieving. A clear goal helps you motivate yourself to be consistent and focused.

Write your goal. Writing your goal will allow your brain to encode it and store it in long-term memory and external storage. According to neuropsychologists, this process is called the “generation effect” ” wherein people better recall information when they create it themselves rather than just reading it.

Being ambitious and aggressive in building better habits is not bad at all. However, you must have a realistic perspective and discern if your aim is too big to become unattainable. Thus, it is always best to start small and end big.

According to Josef B from the book Tiny Habits, The Small Changes That Change Everything by BJ Fogg, – “Tiny Habits is the only method for change that worked for me.” Also, Rob G says, “Tiny Habits is a roadmap to a better you.”

A simple example of making tiny habits is taking a daily short walk that would eventually lead you to an exercise habit—or bringing a home-cooked meal to your office that could lead you to better eating habits.

These are small steps that won’t overwhelm you, and these small beginnings will eventually bring you to bigger wins that ultimately form better habits in you.

Making your way to build a better habit takes lots of effort. And these efforts must not overwhelm you; instead, these efforts should be actionable rather than complicated. Follow the simple tips above, aim for success, earn that good habit and succeed in life.