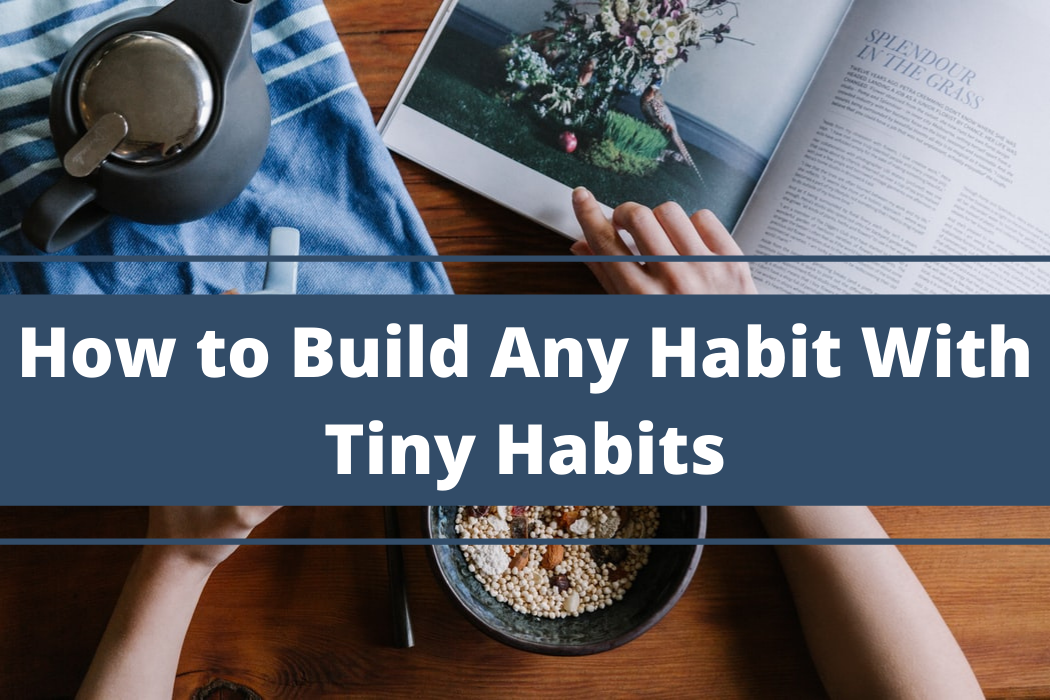 We all know that you can’t start a daily exercising habit by doing hundred push-ups on day one. If you aim for something so high on day one, you’ll lose motivation and fail.

That’s where tiny habits come in. This is a revolutionary concept proposed by BJ Fogg, the behavior scientist credited for founding the Behavior Design Lab at Stanford University.

This is true for building a habit and breaking an old habit in equal measure.

This post describes how you can use tiny habits to build any new habit or to break an existing habit. If you’re looking for some examples of tiny habits for the most common habits people all over the world are trying to build or break, click here.

Step one: Identify the tiny habit

The most common mistake people make while trying to build a new habit is that they start too big. To avoid falling into this trap, it’s important that you identify a habit that’s tiny enough so you don’t have any excuses. If you pick something sufficiently small, you can keep doing it every day until it becomes such an important part of your life that you no longer have to think consciously about starting it.

You can discover a tiny habit by experimenting with the subcomponents of the Ability variable from the B=MAP Model, namely time, money, physical effort, mental effort, social deviance, and routine.

Start small. For example, if you’re trying to build a habit of reading every day, you can start by reading one sentence. These tiny habits act as the foundation for long-term behavior change. If they feel too tiny, feel free to do more and treat it as extra credit. No matter what you do, never skip the bare minimum — the tiny habit — that you had pledged yourself to.

Any existing habit is the prompt or cue. There anchors are things you do everyday, no matter what. These include things that you don’t even think about doing, like eating food, brushing your teeth, taking a shower, etc.

Here are some examples of tiny habits, combined with existing behaviors:

According to Fogg, it’s important to combine the new tiny habit with a previously established habit so you’ll remember to do it every time. This will make your journey of adopting the tiny habit easier and minimize the need for constant reflection.

Another reason why most people fail to build new habits is that they judge themselves too harshly. They hold themselves up to insane standards, and when they are unable to complete these tasks, they fall down the rabbit hole of guilt and self-blame.

To avoid spiraling down the same abyss, it’s important to celebrate small wins and reward yourself every time you manage to successfully complete one tiny habit.

The choice of reward can vary from person to person, but it’s important to identify a reward before diving right into the action. Reward yourself immediately after you finish performing the habit. That way, it will be easier to stick to your goals as you know you’ll have something fun to look forward to when you are done.

Even if you follow all the steps, there might still be days when you fail to stick to the tiny habit you had pledged yourself to. Even in such cases, avoid negativity. Treat this as a slip, a blip on the radar that you can surmount the next day.

Yes, you failed today, but so what? You can start again tomorrow and keep the momentum going. Be kind to yourself and celebrate small wins, but don’t treat every small “loss” as a major “defeat.”

If you keep repeating the habit tiny forever, you will continue to see tiny results. For long-lasting change, it is important to increase duration and dosage of the the habit over time.

If you feel demotivaed in the beginning, remember you’re not looking for results right now. You’re simply trying to create the habit. The results come later, once you’ve successfully established the habit and incorporated it into your routine.

So, what are you waiting for? Find a life coach from the world’s best coaching directory to unlock the next level in your life today!